The students walk in on Friday to wrap up a roller coaster like week (more posts on that to come). The students heard the music and saw a simple question: 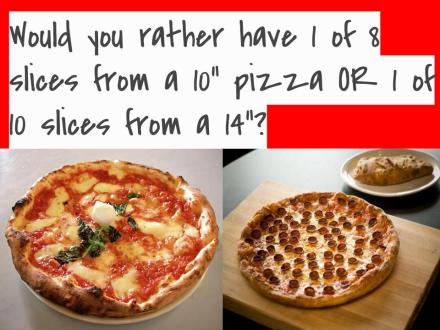 We had been covering a unit on deeper extensions into 2-dimensional area and perimeter.  This question fit right in with calculating the the area of a sector in a circle (also known to the layman as slices of pizza).

The students saw the question and almost felt lost.  They didn’t even realize it was a question because it wasn’t specific enough.  A common response was, “Do you mean which was is bigger?”  I replied, “I don’t know, do you want more or less pizza?”

Students then commenced with table talk and less than 10 minutes later were ready with their responses.  Before looking at calculations and actual numbers, we took a short poll from all the tables.  For each class it the split was nearly even.  So we settled the argument with the calculations.

The results were not exactly close.  1 slice had about 10 square inches while the other had 15.   I noticed that we could make the decision harder by using a combination of slices to create an equal proportion.  2 of the 15 square inch slices, and 3 of the 10 gave two nearly equal groups.  Now the extension.

I had created a #Geogebra applet before school that was originally intended to help visualize the comparison of the two pizzas.  This allowed the students to interact with the question.  The visualization of numbers is often a challenge, on both sides of the learning experience.  These visualizations can be hard to create in a static snapshot, much less something that is interactive and dynamic.  Organizations like Geogebra and Desmos have all but eliminated those obstacles.

Not every lesson can be awesome like this one.  But the format of activity in my classroom has changed significantly with dynamic programs like Geogebra and Desmos.  It’s transforming into something much better.

Tags: area, geogebra, proportional reasoning, would you rather